1. How many Americans live with hearing loss?

According to the National Institute on Deafness and Other Communication Disorders approximately 17 percent (36 million) of American adults report some degree of hearing loss. Unlike those challenged by mobility or vision loss, people challenged by hearing loss are often an invisible and forgotten minority. About 1 in 4, some 8.4 million have hearing aids, a number that would surely increase if hearing aids could double as wireless, customized loudspeakers.

Today’s digital hearing aids effectively enhance hearing in conversational settings. Yet for many people with hearing loss the sound becomes unclear when auditorium or TV loudspeakers are at a distance, when the context is noisy, or when room acoustics reverberate sound. A hearing loop magnetically transfers the microphone or TV sound signal to hearing aids and cochlear implants with a tiny, inexpensive telecoil receiver. This transforms the instruments into in-the-ear loudspeakers that deliver sound customized for one’s own hearing loss.

3. How many hearing aids have the telecoil (t-coil) receptor for receiving hearing loop input?

From its survey of hearing professionals, the Hearing Review (April, 2008) reported that Respondents said that 68% of their fittings included a telecoil, [an] increase . . . from 37% in 2001. In its 2009 reviews of hearing aid models, the Hearing Review Products showed that most hearing aids ”including all 35 in-the-ear models”now come with telecoils. Moreover, the greater people’s need for hearing assistance, the more likely they are to have hearing aids with telecoils as did 84 percent of Hearing Loss Association of America members in one survey. New model cochlear implants also are available with telecoils.

4. Can hearing loops serve those without telecoils or without hearing aids?

Yes, all forms of assistive listening, including hearing loops, come with portable receivers and headsets (though most such units sit in closets unused.)

5. What does a hearing loop cost?

Costs range from $100 to $300 for self-installed home TV room loops up to several thousand dollars for professional installation in an average-sized auditorium or worship space. Most churches can install a hearing loop for little or no more than the cost of one pair of high end hearing aids, though a large facility with embedded metal will be more expensive. Auditorium installations cost somewhat more than do assistive listening systems that require checking out a receiver and headset. But the cost per user is typically less (because many more people will use assistive listening that is hearing aid compatible). Moreover, hearing loops offer long-term savings from purchasing and maintaining batteries in fewer portable listening units. For the user, the telecoil cost is nominal and typically does not add to the hearing aid price.

Generally not. Old (nonflat) computer monitors, old fluorescent lighting, and some old dimmer switches generate interference, as do some cars and all airplanes. But the experience in hundreds of West Michigan venues and thousands of Scandinavian and British venues is that interference-free installation is nearly always possible.

7. Isn’t this a decades-old technology?

Like electronic computers, magnetic induction loop technology began more than a half century ago, and now is in newly developed forms (with new amplifier and telecoil technologies, and new computer-modeled designs for complex installations) and with increasing applications.

New wireless technologies, including Bluetooth, do some helpful things, such as enable binaural phone listening. But Bluetooth isn’t an assistive listening answer (it requires significant battery power and has limited range). An alternative future assistive listening solution”one that, like hearing loops, is hearing aid compatible will need similarly to a) be inexpensive (essentially no cost to the consumer), b) be capable of covering a wide area, c) drain little battery power (telecoils require no power), d) be universally accessible, and e) be sufficiently miniaturized that the receiver can fit in nearly all hearing aids.

9. Can hearing loops be used in adjacent rooms?

Yes, with a professional design that controls sound spillover.

10. Are there advantages to using hearing loops for home TV listening and in public settings?

A hearing aid compatible loop system delivers sound that’s customized by one’s hearing aids for one’s own ears. It requires no fuss with extra equipment. And rather than plugging one’s ears, it allows use of a mic + telecoil (M/T) setting, enabling one to hear the room conversation or one’s phone ringing. In public settings, their main advantage is that, when not hearing well, people need only activate their telecoils. There’s no need to get up, seek out, and wear conspicuous equipment (which few people with hearing loss take the initiative to do). Additionally, the sound is contained in one’s ear, without bothering others nearby. There is no need to juggle between headsets and hearing aids (during, say, a worship service). And there are no hygienic concerns about putting in or on one’s ear what has been around others ears.

11. Can hearing loops work in transient venues such as airports, at ticket windows, or at drive-up order stations?

Indeed, which is why New York City Transit Authority is installing hearing loops at 488 subway information booths. In such venues, where checkout equipment is not realistic, the only possible assistive listening device is one’s own hearing aid or cochlear implant.

Why Architects Should Consider Audio in Design 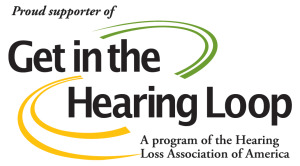 I don’t wear a hearing aid but tried on a headphone . . . and the sound came through loud and clear.~Michael Kelly, Columnist Omaha World HeraldTweet